DARPA’s AlphaDog (LS3) can now sit, follow, and roll over

The Incompetence of Susan Rice 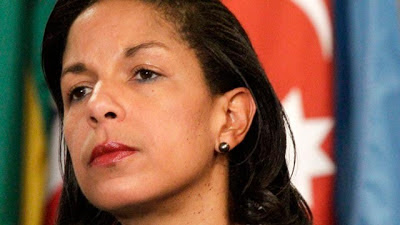 Okay, maybe it is just me, but for some reason I do not see why folk are all up in arms and extremely supportive of Susan Rice. Sometimes I think it is the 98 percent of black folk syndrome that believes Obama or Rice can never be wrong, or make mistakes, intentionally misinform of even worse – never lie.

Rice, I suspect is thought by many to be Obama's top pick for secretary of state, if you asked me based on what I understand, her statements and her policy, she is dangerously incompetent to be SOS. Now she is smart, but the only way I can support her selection is if all we want is an incompetent war monger in the office. True, she is a Stanford University graduate and Rhodes Scholar who worked for the reknown McKinsey & Company before she joined the National Security Council under President Bill Clinton, and from there she became President Clinton’s assistant secretary of state for African affairs, but job promotion has nothing to do with utility of being a competent SOS.

The merit is there, no question, but when one looks at intent, and attributes siding with liberty, freedom and truth, Rice gets no points. Whether or not she intentionally and willfully misled the American people on the Benghazi attacks, or ran misdirection for the Obama Administration in denying a terror attack prior to his re-election is not the point. The bottom line is that she is not the best choice for the job if you look at the world from an African American who takes prided in having the first African American President albeit I agree with less than 10 percent of his policy – foreign, domestic and economic, Rice is a major point of consternation.

Starting with Africa and Rwanda specifically, Rice’s lack of action pertaining to genocide in that nation shows that she has no backbone to assert democracy and liberty on behalf of America. Not to mention the manner in which she should have broken her neck on behalf of the Clinton Administration to deny assistance to the Tutsis. Yes, based on her recommendations as a part of Bill Clinton's National Security Team in 1994, her refusal to suggest action in the Rwanda genocide that left more than 800,000 men, women, and children to be hacked to death by machete in the fastest genocide ever recorded will always be a scarlet letter on her dress and make her this generations Hester Pyrnne.

This was nothing, she even went farther by obstructing the efforts of other nations to stop the slaughter. Instead, although in April 1994 the Canadian UN commandeer in Rwanda, General Romeo Dallaire, declared that he required only 5000 troops to stop the genocide, she advocated that the UN force under Dallaire reduced by ninety percent to 270 troops.

Samantha Power of the Atlantic said it best as the author of the Pulitzer-Prize winning A Problem of Hell who referred to Ambassador Susan Rice and her colleagues in the Clinton Administration as Bystanders to Genocide said it best when she quoted Rice in her 2002 book "If we use the word 'genocide' and are seen as doing nothing, what will be the effect on the November congressional election?" Meaning - Rice's saw genocide as being less important than partisan politics interests. This is not partisan on Power’s behalf, seeing that presently Power currently is a Special Assistant to President Barack Obama.

Rice also has a troubled past as it pertains to the Iraq war and invasion by President Bush which she vehemently supported. In one instance she stated in 2003 to NPR: “I think he has proved that Iraq has these weapons and is hiding them, and I don’t think many informed people doubted that.” In another, she stated: “It’s clear that Iraq poses a major threat. It’s clear that its weapons of mass destruction need to be dealt with forcefully, and that’s the path we’re on. I think the question becomes whether we can keep the diplomatic balls in the air and not drop any, even as we move forward, as we must, on the military side.” I can also throw in Libya where she clearly was the main person to move the President to take action against Gaddafi and Syria, where she promotes armed intervention against Syria. In general, Rice has a track record of doing all I hated that George Bush did or attempted to do -- advocate nation-building in failed states. Add to this her support for more troops in Afghanistan, she appears to be no different that Rumsfeld or Wolfowitz.

She supports Israel unconditionally, speaking of democracy in Egypt, Libya and Syria but not for Palestinians. And she has not said one word on Israel rounding up African to intern and deport thousands deemed a threat to the Jewish character of the state. She is silent of rounding up members of a different racial group and holding them in camps for deportation and the overt hostility towards blacks in general, where the nation or tax payers fund refer to blacks and Africans as a cancer and an AIDs virus on the Israeli people.

Add to the aforementioned incompetency and a policy that seems to support Israel no matter what and African neocolonialism, she has even more baggage. If she is selected by the President to be SOS, she will have a major conflict of interest. Currently, Rice holds millions of dollars in investments in Canadian oil companies and banks that have keen interest and investments in the $7 billion Keystone XL Pipeline. If she was to become the next Secretary of State, she would have the final say in determining if the pipeline gets approved and built or not. According to the environmental advocacy group Natural Resources Defense Council and financial disclosure reports, Rice has MAJOR INVESTMENTS in more than a dozen Canadian oil companies and banks that would benefit from enhancement of the Canadian tar sands industry and the building of the KPL. Open record reports indicate that approximately a third of Rice's personal net worth (stimated in 2009 to be between $23.5 million and $43.5 million) is in Canadian oil production and other off shoot markets. Not to mention that Rice has between $300,000 and $600,000 invested in TransCanada, the company trying to get permission from the State Department to construct portions of the KPL from Oklahoma to Canada.

When we look at her investments in banks, the conflict of interest issue becomes more lucid. She has “investments totaling at least $5 million and up to $11.25 million in Bank of Montreal, Bank of Nova Scotia, Canadian Imperial Bank of Commerce, Royal Bank of Canada, and Toronto Dominion.” A report by the Dutch consulting firm Profundo Economic Research notes that some of these banks are largely responsible for underwriting the expansion of Canada’s tar sands industry.

And I will not mention that Rice and her husband own at least $1.25 million worth of stock in four of Canada’s eight leading oil producers, as ranked by Forbes magazine including Enbridge, (company responsible for spilling more than a million gallons of toxic bitumen into Michigan’s Kalamazoo River in 2010 -- the largest inland oil spill in U.S. history).

Susan Rice is smart, that is not the point, and she just should not be the SOS.  Now she may have another stage of genocide on her hands as she did with the invasion of the Democratic Republic of Congo by U.S. allies Rwanda and Uganda which left six million Congolese dead begining in 1996. Now with the capture of Goma, an eastern Congolese city of one million, by “rebels” under Rwandan and Ugandan control complete with the support of western nations the United States and the United Kingdom (who are arming,training and equipping the Rwandan and Ugandan militaries). Afterall our U.S. ambassador to the UN Susan Rice is the main one responsible for keeping information on Rwandan and Ugandan role in the ongoing genocide out of international policy.  It was Rice who blocked the UN Security Council from demanding that Rwanda endsupport to M23 rebels.


The way I see it anyone who supports Susan Rice either doesn't read, think for themself or is mentally retarded. The saddest thing about it for me is seeing black folk support her without question. Maybe idiots shouldn’t vote