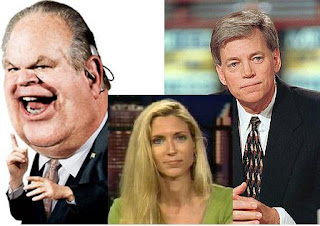 I Before E except after C: This is their mantra. They hate Islam and immigration, except that is after colored Folks.

They believe that if their children , in particular daughters, swim in a pool with men they will certainly get pregnant.

They actually only watch one television station - Fox, but they both think every thing on it from Football on Sunday to Glee is actually NEWS and fact taken from Revelations - Fox News Most Trusted Channel In News.

The father, the son and the holy ghost are code words for David Duke, Ann Coulter and Rush Limbaugh

You believe the Sermon on the Mount was preached by Rev. Jerry Falwell and not Jesus.

You believe only racists, homophobes, Nazis, polygamists, rednecks and Republicans are the only real Americans

You believed that Sarah Palin actually can see Russia from her front porch or that she has even read anything written by Shakespeare or anything other than what someone writes on the palm of her hand for her.

You have someone in your family that fly's the rebel flag and/or lives in a trailer park.

You believe the sun revolves around the Earth.
Posted by All-Mi-T [Thought Crime] Rawdawgbuffalo at 12:51 PM

With the DC public school system having fallen below "Adequate Yearly Progress" - do you care to venture how many of the people matriculating through this system believe in many of these same things - duly customized for their own bias?

I would have assumed that THIS is a far more important focus for you.

Wow David Duke is really starting to show his age. Pretty soon now he's gonna have to switch to a grey sheet, rather than that dull ass white one he's been wearing for years.

Lol at the Grey sheet lol