If I am not mistaken, it seems as if the past, that horrible past that once draped America as a Nation based on race has returned. Maybe it has never left; maybe it has just been cloaked behind the smiles and eyes of its citizenry.
So much attention is directed toward anti-immigration, ant-Muslim and even anti-black that it is just ridiculous. I just wish folk were able to man up and say how they feel. The fact is that fear is a function of not understanding what is different. And as long as we have had people from Europe living in this great nation we have seen fear. Fear against the Native Americans which they infected with disease and stole their land to the fear against African slaves, who they felt inherently would seek revenge for their cruel and unusual treatment of humans they selected to perceived to be less than such.
There was even the fear of their own kind, when the first anti-immigrant fervor hit the nation in the 1840s. Then under the guise of nativism, vehement protest was rampant as immigration from Europe increased. The simple fact is that the Tea Party is no different than the Order of United Americans and the Order of the Star-Spangled Banner organizations that arose more than 160 years ago due to the unfounded fear that the country was being overwhelmed by German and Irish Catholic immigrants, who were perceived to be contrary to Anglo-Saxon values. 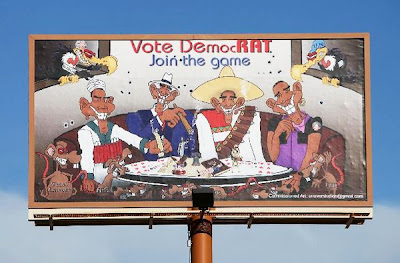 Now just as then, felt resentment at the new arrivals and became known as nativists. Through violent protest and clashes were the result occurring cities across the nation. Their rhetoric, as is the rhetoric of the Tea Party was used to inflame and for the abutment of division. For the assertion that the Tea Party is diverse or seeks diversity is just PR and like saying the Council of Conservative Citizens wants to have some black folk under their sheets.
So what is it that makes racism appealing to some on the extreme right and some in the Tea party? What is that would make the common person support a GOP congressional candidate like Rich Lott, who intentionally wears and poses in a Nazi uniform? Is this what the Tea Party endorses, for if it is, I can see no difference in Lott wearing this than a white robe and hood, regardless of the reason?
I mean why would a man want to dress up or be associated with participating in historical re-enactments that promulgate a racial crusade to rid the world of subhuman’s, which is both the historical truth that the Germans then and the Klan today purport.
As opposed to fighting bigotry and hatred it seems retro chic to support it. But then again what could one expect, since most do not know that Neo-Nazis started the Tea-Party movement. Yes they in concert with the Limbaugh’s and the Glenn Becks of the world have taken Hitler’s message well because the way I see it, the Republican Party is building its political future on the bigotry and divisiveness of the Tea Party movement. Just as in Hitler’s time, when the German economy was stalled and saddled with the debt of World War I and Bismarck, new American like Nazis are now taking advantage of Americans economic woes and high unemployment, so it is easier to by scape- goat African, immigrants, Muslims, gays and Jews, thus their appeal with white supremacists, the Christian identity movement and white nationalists.
The sad reality is that white supremacists sees Tea Parties as an entry into mainstream American politics and their best way to get what they really want, a Hitler-like nationalistic racist leader that places the good of white Anglo Saxon protestants first above all people. They desire an American for whites and people of European descent only and preferably only Christians with no integration and mixing of the race. The want what Hitler said he would promise the true and pure Nordic Germanic races – Work, Bread and Honor.
Posted by All-Mi-T [Thought Crime] Rawdawgbuffalo at 11:17 AM

I always find it hilarious to find people who follow Hitler and his rhetoric. Epically when he did not even fit the things he was promoting. I watched a well made documentary that strongly suggested and I believe proved the Austrian was of Jewish decent. And most importantly he was not not fair skinned, blond and blue eyed.

And how about adding some more pictures? I’m not trying to offend anyone, content is really great. Just according to the scientists visitors acquire info much more effective if there are certain useful pictures.

It is about racism now...can we please drop the racism. Why do you think this is a reality in America? It is a reality around the world and we are the most tolerant Nation in the world.
WHY do you write your blog to assume there are only two points we can go. How can you talk of racism when everything about your blog is black this and black that. You are racist and you are hindering the dream. Drop the I am victimized mentality. Drop the partisan talk and drop the thinking that the Gov't controls the direction of the country. You do not Obama or bush or reagan or lincoln. DROP THE TRASH TALK and put some substance in your writing. Also stop using WSJ as a solicitaion platform, that is spam. Have you no dignity? of course not you just want to blame someone for the problem instead of creating a solution to the problem. I stand against all form of predjudice and I beleive a free people are a people that will make it happen and not wait for a handout.

Rather interesting blog you've got here. Thanx for it. I like such topics and everything connected to them. I would like to read a bit more on that blog soon.

Great writing! You should definitely follow up on this topic :P