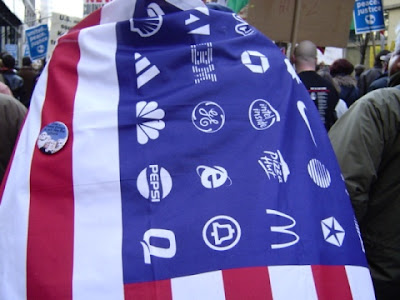 I would like to say the new world has not been in such a despondent state of precariousness since King Manuel I set Vasco de Gama loose of to this region from a village on the Tagus River in 1497. Although the same level of disease and pestilence may not be present, a future of slavery and servitude just might be.

Americans, especially African Americas, please wake up and stop falling for the okie dokie, this free thinker cannot think freely for us all. Historically we had jobs and our dollar was worth something in most cases when backed by Gold. Now with internationalist and globalism we do not because in decades prior, we would have stopped the outsourcing of jobs by imposing tariffs. And I anticipate things only will get worse before they get better for taking advantage of idiots is what politics is all about for the Obama administration and the republican led congress.

Yes Virginia, they are all in the same gang. They are all millionaires protecting millionaire interest, not your or mine or the average American. I just as, Tea party of Obama supporter, what do they have in common with you? Nothing, your wallet can empty and your house can foreclose but not theirs. True Obama at least promulgates a plan while the Republicans have no plan, but his plan worked for all in congress and the senate regardless of political affiliation.
Although the US consumer base is probably the largest in the world and buy more stuff than any other nation, our politicians both republicans and democrats only gives away access to the best market on the planet. Jobs will only return via a top level educational constituency and manufacturing growth. the only way manufacturing jobs are going to return to this country is if corporations find their foreign made products cannot compete with American produced ones.

Dr. Ron Paul understands, for if Obama or the congres did, they would have proposed a value added or import fee to raise the cost of foreign made products to the comparable US produced materials to mathematically negate foreign cheap labor. Yes 3rd grade math would advocate such. Lesson being, if a company desires to sell in America, then make it in America. This would also go a long way to assist in paying down the nation’s debt – but what do I know as a free thinker?

In terms of a corporate tax rate of 35%, most US corporations don’t pay anything near that if anything at all, since the corporate share of income tax in terms of all income tax collected is about 7%. Part of the decrease is due to the moving of companies off shore. Part is due to the loopholes and tax credits that companies use to decrease their tax. A flat corporate income tax would help solve the deficit. Tariffs would force more companies to do business here which increase the corporate share of income tax. Obama’s jobs bill speech indicated he was not on my side and it broke my heart. I know he is smart enough to understand what is aforementioned, but it proposed nothing that would help the average American and actually sounded as if his sole goal was to fire up his union base: union construction, teachers and other public sector workers like police and fire persons.

Although Obama’s plan does not do enough, a proposed 1.5% GDP increase in 2012 with 1.2 million – 2 million jobs isn’t bad given the Republican congress as his opposition. But facts are facts, job creation requires more than yelling, demanding and good subject verb agreement when many parts of the world, pay is around 15 dollars a day or lower. Nothing in his plan deals with this, or preventing jobs from being shipped out of the country or even maintaining Davis-Bacon act wages. More interesting, it Seems Obama forgets us little guys while Republicans ignore us. The many who do not have a drivers license, and now on a felony probation for not paying child support, and as a result not able to pass background checks, or who have a bad credit report due to becoming one of the long-term unemployed?

America, any dream of days of yore may be over. The Middle Class has disappeared along with manufacturing. All we have is quasi-sovereignty and our debt is eroding that. Only a question of time when what we see in the streets of Greece, Italy, Israel and Libya takes root here. There are no shovel ready jobs in America, we don’t even have shovels let alone make them anymore.
Posted by All-Mi-T [Thought Crime] Rawdawgbuffalo at 9:56 AM

No doubt, the writer is completely right.