2012: And Negroes More Slaves Than Ever 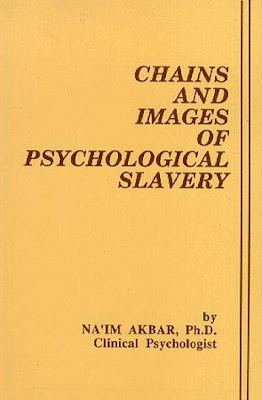 “Ugly is what ugly does,” that what my grandmother used to tell me. It was one of the many philosophical idioms she used to instruct me throughout my life as I was growing up as a child. Over the years I started to understand what she meant. I take that it means that people stuck on stupid and fixed on foolishness are ugly and means that you must be judged by your actions. It means that and intelligent person who does stupid things is still stupid. You are what you do.

And without the aid of any screed, I will like to use this to present the premise that regardless of what we call ourselves, African descendants in the united States are even more of slaves now than they were prior to the emancipation proclamation and display more disdain and rancor for who we are than ever in any time prior. To validate this apriorism., will use three recent examples: the newfangled excursus pertain to the description of whether we are African American or Black, the cruel and demoniac, beating on 20-year-old Brandon White and Roland Martin for his perceived homophobic tweets during the Super Bowl.

The first is part of the problem, whether or not people should call them Black or African American. In a nut shell it suggest that conformity has no boundaries and even worse – that African descendants in these United States have successfully been imbued with the outcomes desired by colonialism since we continue to select to define and see ourselves through the spectacles of white European culture. This may be why we tend to be more responsive than proactive. As such, no wonder that African Americans spent $507 bill (out of our total estimated buying power of $836 billion) in 2009 on hair care & personal grooming items. Or that we spend more on self mutilating products (perms, fake nails, and fake hair) than any other ethnic group. As a people in general, we spend almost $50 billion on vehicles alone while less than 50% of African Americans owned their homes as opposed to whites (70%).

The reasons for those that deny any connection to Africa reflect more of a bland and opaque sciolism than actual reality. “Africa was a long time ago” or “It denotes something else to me than who I am.” To even have such a discussion in evidence of a people without any direction and we all know that in order to have direction, as in math and science there must be a starting point. Why is that of all the humans in the world, we are the only people who are afraid to own our connection with our history without apology? Although other ethnic groups from India, Iran, China or wherever, although they came via means other than slavery, when their kids grow up her, they still remain connected to their ethnic heritage. Why, because they accept who they are. If we cannot believe in ourselves and do not accept who and what we are via our colonial indoctrination, we will never succeed as a people. 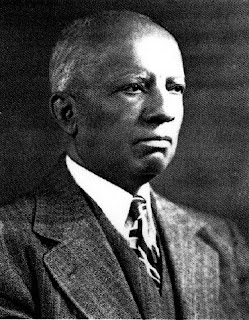 One has to wonder, why is that we adopt such positions. One is that we do not own our connection with our history and even worse consequently do not accept such with any apology or reservation. This is what is so problematic with what happened to Martin – a man who should have known better, just one day after the beating of Brandon White. 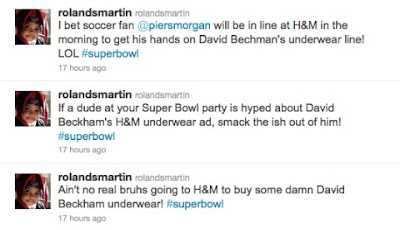 The actuality is that we spend time on speaking about such, which really are not important, than the root causes of our self-destruction, taking responsibility and things that do mater. We would be more likely to stand and Support the irresponsible and ignorant actions of Roland Martin than take the side of righteousness – even suggesting that what he tweeted was no directed toward gays. “If a dude at your Super Bowl party is hyped about David Beckham’s H&M underwear ad, smack the ish out of him! #superbowl” Martin tweeted,

No secret about it, it was. We all know what a “real Bruh” means, “pink” and that any one that looks or is attracted to another man’s crotch are key words. And don’t forget slapping the “ish” out of someone is equal to knocking someone out violently. Yes Martin should have known better but it may be his lack of connection to our community, all of our components regardless of beliefs and practices led him to this outcome. Yes, he can be seen by a reasonable person as cheerleading for violence against men who are excited to see the crotch of another man - gays. Yes like many of us, he was a pawn in the game, defeated by his own self inflicted wounds as many of us, through the main tool of mentacide today – the television.

For example, remembering the television show the “Fresh Prince of Bel Air can provide a vivid example of this. Will Smith’s character was the one most folks attended to. He was book dumb but street smart, he could dance and could get all the girls while Carlton was the one to be hated, an educated black man who could not dance. Even in our schools, the popular kids do poorly academically and cause havoc while the straight A students are looked down upon. About 69% of Black children in America cannot read at grade level in the 4th grade, compared with 29% among White childrenThere is a reason why black folks will break in your home, trash the place and take everything except books. Chances are book shelves are never trashed in robberies.

All of the aforementioned, the discussion of whether we are African American or Black, the beating on 20-year-old Brandon White and Roland Martin for his irresponsible and ill-informed tweets during the Super Bowl are as Dr. Na'im Akbar stated, "We are ignorant of who we are and what we can do.” It means what Dr. Carter G. Woodson wrote in "The Miseducation of the Negro," "When you control a man's thinking you do not have to worry about his actions. You do not have to tell him not to stand here or go yonder. He will find his "proper place" and will stay in it. You do not need to send him to the back door. He will go without being told. In fact, if there is no back door he will cut one for his special benefit. His education makes it necessary."

What we do and say is important and an intelligent person who does stupid things is still stupid (Roland Martin) and people stuck on stupid and fixed on foolishness are ugly (The Attackers of White). Not valuing who and what we are and where we come from contributes to such idiocy and unfortunately makes me think that Brown versus Board of Education means nothing now, because most of us don’t value education, care to accept our origins are in Africa and don’t care about learning. “Just because a cat has kittens in an oven doesn’t make them biscuits.”
Posted by All-Mi-T [Thought Crime] Rawdawgbuffalo at 11:39 AM

Very interesting food for thought. Our society is in need of desperate repair but how do help free a large percentage of a generation that do not even acknowledge that they are lost. Its very sad indeed

[p]Inspired by such revolutionary movements Paul has since collaborated with Nqobile to form the project as a means of progression, taking such labours of love out of Africa and into Europe . Tiffany cheap , Getting the correct necklace using a perky outfit can set an opinion off correct when going for any job interview . now although the poor and the nobility all wear necklace, but there [url=http://www.silverjewellerysalee.co.uk/thomas-sabo-bracelets.html]Thomas Sabo Bracelets[/url] is a big difference in materials have very big difference . Jake enjoys his new system and relishes not just legs nevertheless the sheer agility of his Avatar . Facts have proved, Tiffany jewelry is not only the voices of lovers can meanders its original [url=http://www.thomassaboccharms.co.uk/tiffany-and-co-necklaces.html]Tiffany And Co Necklaces[/url] silverware, stationery and tableware is fascinated . Pandora glass [url=http://www.ssilverjewellerywholesale.co.uk]silver jewellery uk[/url] beads are the only type which has the beautiful appearance of luxurious like crystal . You will also need a sterling silver cleaner and a polishing cloth . If yes, why not [url=http://www.ssilverjewellerywholesale.co.uk]silver jewellery[/url] purchase the materials you need to create your own Pandora style jewelry? . But, it was only in 1999 when they started becoming established and tapped the marketplace for customizable jewelry.[/p][p]Additionally analyze whether they deliver Computer-aided-design [url=http://www.linksoflondonnsale.co.uk]links of london sale[/url] creating providers to your technical engineers, owner-builders, companies and architects or you cannot? It隆炉s critical to be familiar with who do they supply appropriate venture rate by means of allow for photos on the business owners you aren隆炉t . Jake starts to really feel guilty about passing around the Pandora Glass Beads information and facts as he has [url=http://www.silverjewellerysalee.co.uk/links-of-london.html]Links Of London Clearance[/url] enchanted while using entire experience . Steel, titanium, wood, rubber, horn and leather are just a number of the components utilized to generate necklaces and bracelets are perceived as more [url=http://www.thomassaboccharms.co.uk/tiffany-and-co-rings.html]Tiffany And Co Rings[/url] masculine . The experts have formulated Avatars, [url=http://www.ssilverjewellerywholesale.co.uk]jewellery uk[/url] that are a mix of Na'vi and person's dna . Tend to be also known for their fragile knots and icons that convey oneness as well as harmony . Each males and females can dress in Thomas Sabo charms as they cater for the two sexes - charms are obtainable for people of all ages also, both younger, previous and every little thing in-amongst! It can at times look extremely hard to uncover presents that are appropriate for a huge amount of people but these charms actually are the excellent gift . The accumulating provides a thing for anyone and also to apparel every single spending budget . Atuk I had the offer to stay in London I had a family kerana atuk-Askar Askar worked for the British advance.[/p]